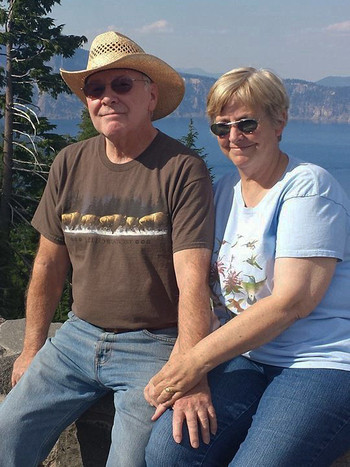 “If you like surprises, pick a spot in nature and just sit quietly.”  Barbara Scoles

Barbara has always loved nature photos and finally started photographing wildlife just before her retirement from the big-tech industry in 2010.

She shares her love of nature with her husband Harry.  He is an excellent wildlife spotter, driver and photographer’s helper in addition to being the best possible companion.

In 2011, while living in the Portland, OR area, the couple took their first trip to the Klamath Basin.   They saw an article in their local newspaper about the western and Clark’s grebes courtship at Putnam Point.  Barbara just had to try and take photos of the grebes “dancing”.

After visiting multiple areas in the Klamath Basin for photos, and realizing they would be 5 hours closer to family, they decided to make the move in 2012.

At first, Barbara delighted in the variety of wildlife and the beautiful scenery she was able to photograph.  As the years passed, the refuges and other areas in the Basin saw a decline in wildlife populations and the scenery on the refuges began to deteriorate.  Every year lately, birds are dying at alarming rates due to the lack of water mainly at the hands of man.  Barbara finds that it is not only heartbreaking but also unacceptable!

Barbara has won various awards over the years for her photos.

She had her first individual gallery showing at the Klamath Art Gallery in April of 2022.

She has had photos published in scientific journals, various newspapers and websites including the online Smithsonian Magazine.

Her photo of a hooded merganser was used as the featured bird for the Winter Wings Festival one year.

She has also been a volunteer with the Klamath Basin Refuges and the Winter Wings Festival.